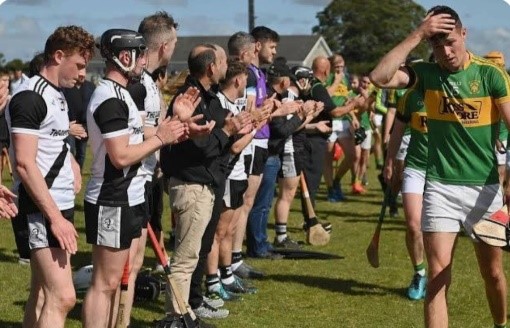 A 3-15 to 1-20 victory over Clonoulty Rossmore in Templetuohy secured top place in the group and a County quarter-final spot for the seventh time in eight years (2015, 2016, 2017, 2018, 2019, 2021, 2022). With 62 mins gone Jerome Cahill was harshly penalised 45 metres out and Jack Ryan slotted the resultant free over the black spot to bring the sides level. A draw would propel Clonoulty to first place in the group and consign MacDonaghs to “No Man’s Land” in third position. Sean McAdams, who had been very subdued for most of the game, gathered possession from the puck out on the right wing and headed towards goal. Sean took on the responsibility himself and fired a left-handed shot just inside the left post to raise a vital white flag. He hadn’t scored a more important point since the 2014 U14’B’ final against Shannon Rovers in Borrisokane. On that occasion he bisected the posts from a midfield free for the winning score. After Sean’s point Clonoulty had one more attack which yielded only a wide. There was palpable relief among the players, management and supporters when the final whistle sounded.

We should have been out the gap before the dramatic conclusion. Three times in the second half we opened up a seven-point lead and looked to be in control but Clonoulty kept plugging away. On the other hand it could be viewed as a terrific victory considering that so many players struggled to get into the game and our first touch was not up to its usual high standard. We had the aid of the stiff breeze in the first half and led by 0-11 to 0-6 at the break. Six of those points were scored from frees by the dependable Willie Cleary. Aaron Morgan, our most consistent performer on the day, chipped in with two from play. After playing with the elements a five-point cushion looked far from healthy. 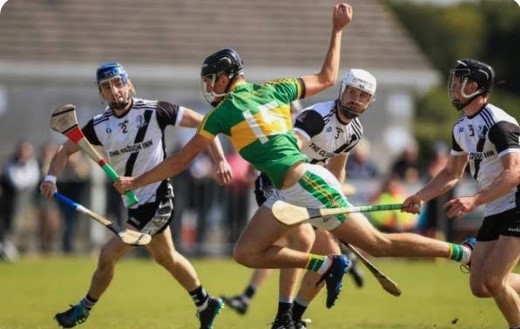 A Jack Ryan point from a free on the restart cut the  gap to four. The Magpies got a great boost in the 33rd  minute when Cian Darcy beat Martin Sadlier to find the net to give us a seven-point cushion. Clonoulty responded well to score four of the next five points punctuated by a Willie Cleary point from a 65. In the 41st minute Seamus Hennessy tapped the sliotar to the net after some lovely, combined play by MacDonaghs.  Jack Ryan (free) and Jerome Cahill swopped points before indecision in the Kilruane defence allowed Stephen Ferncombe in for a Clonoulty goal in the 46th minute. The West champions cut the deficit with a point from play but a well-taken effort by Kian O’Kelly restored the four-point advantage. Clonoulty hit a purple patch and scored three points on the trot from play to reduce MacDonaghs lead to the minimum. The momentum was now with Clonoulty but the Magpies rose to the challenge with a goal from Willie Cleary after excellent work by his brother Thomas who had been introduced in the 50th minute.

Clonoulty replied with three points in a row before the soft free in the 62nd minute left the sides level. Sean McAdams became the hero of the hour with his magnificent winning point. An indifferent performance but a great victory. The quarter-finals are scheduled for the weekend of 24/25th September. We can be drawn against Loughmore, Toomevara, JK Brackens or Thurles if the latter two win their  preliminary quarter-finals. We can’t be drawn against Clonoulty or Nenagh if they come through.

Our second team gave a very good account of themselves in the County semi-final against Emly in Dundrum on Sunday evening. The West team came out on top by 3-9 to 2-10.

Our first team played Nenagh in the semi-final on Tuesday evening and prevailed in extra time on a 1-11 to 1-9 scoreline. Match report next week. Our second team play Ballina in the semi-final in Shalee on this Wednesday, 7th September at 6.15pm.

On last Friday evening we hosted Nenagh Éire Óg for a Blitz. Thanks to Nenagh for travelling. 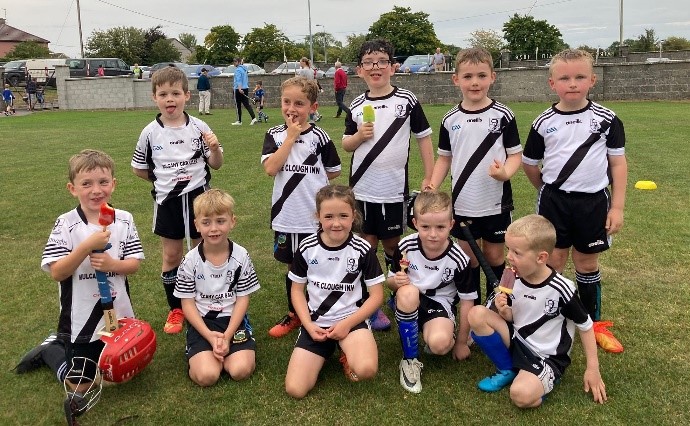 The Tipperary Draw has been deferred until  Friday, 16th September. There is a €500,000 prize fund. This is a very important fundraiser for the club and we are confident that we will get the usual solid support from our members. A total of €16,200 was won by our subscribers in the last Draw.

Congratulations to our €3,000 Jackpot Winner Carmel O’Donoghue, Richmond, Nenagh. The Jackpot resumes at a very attractive €2,000. Tickets are available from the usual outlets or  you can join on Clubforce.com. Thanks for your continued support.

Congratulations to Sandra Williams who was a member of the Team Ireland Tag Rugby team that retained the British & Irish Cup in Leeds on Sunday.

The club extends sympathy to Marie Cahill, Bantiss on the death of her brother Neil Murphy, Oxford, England.