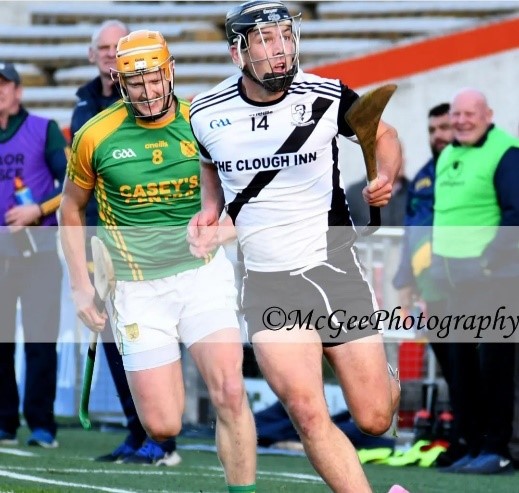 Last Saturday’s hard-earned but well-deserved 2-17 to 2-15 victory over Toomevara secured a place in the County semi-final for the first time since 2019. It was the first time since 1990 that we recorded two successive championship victories over our neighbours – 1986 & 1990 North finals. This latest victory follows on from our North semi-final victory in 2018. Although only two points separated the sides on this occasion a five or six-point margin of victory would be a more accurate reflection of the of the game. MacDonaghs hit sixteen wides and were denied two goals in the first half when Rory Brislane came to Toomevara’s rescue.

This was a much-improved performance compared to the display against Clonoulty when a number of players struggled to find their form. We had eight different scorers from play and although the radar was malfunctioning on occasions we were creating the chances and we avoided aimless shooting. MacDonaghs were the better team in the opening half and led by 0-5 to 0-4 after twenty-five minutes. In the 27th minute David Young fired the sliotar to an empty net after we had been turned over in possession while trying to clear our lines. With thirty one minutes gone the teams were level but Toomevara raised two white flags to take a two-point lead into the dressing room at the interval.

MacDonaghs carried the game to Toomevara in the opening minutes of the second half. Willie Cleary converted a free in the 33rd minute. He then turned provider a minute later. Niall O’Meara surged up field and did a quick one-two with Jerome Cahill. When the movement broke down Willie Cleary latched on to the broken ball, soloed through the defence, hand passed the sliotar to Kian O’Kelly who buried it from close range. Ten minutes into the half Seamus Hennessy was introduced into the fray as MacDonaghs held a one-point advantage. His impact was immediate. He struck two points from distance inside a minute. Toomevara managed to stay in the game and were just a point adrift with four minutes of normal time left. Brian O’Meara had replaced the injured Kieran Cahill in the 54th minute and to nobody’s surprise he was despatched to the edge of the square. Just on the field Buggy made his presence felt. Thomas Cleary broke a long puck out from Páidí Williams to Seamus Hennessy. Seamus flicked it to the flying James Cleary who rode two tackles hand passed it to Jerome who danced round his marker, palmed to the unmarked Brian O’Meara who stretched full length to bat it to the net for a peach of a goal. Cian Darcy added a monster of a point from inside his own 65 as the pendulum swung very much in MacDonaghs favour. With a five-point cushion we should have closed out the game.

However, we were in for a tense finish when Jack Delaney scored Toomevara’s second goal in the 59th minute after we had failed to deal with puck out that dropped on the 45 metre line. Three minutes later Kevin McCarthy added a point from a free to leave just a point between the sides. Cian Darcy then got in a vital hook on Kevin whose shot for the equaliser trickled harmlessly wide. Rory Brislane’s long range effort from a free just outside his own 65 – well within his range – dropped short and Niall O’Meara went into the clouds, offloaded to Seamus Hennessy who relieved the pressure. In the final minute of added time Kian O’Kelly won a crucial free on the right wing. Willie Cleary held his nerve and sent the sliotar between the posts to clinch a two-point victory.

In the County semi-final we have been drawn to play Upperchurch Drombane  on Sunday, 9th October in Semple Stadium at 2.00pm.

In the second round we came out the wrong side of a 1-14 to 1-13 scoreline against Silvermines in MacDonagh Park. This panel has been badly hit with injuries with Colm Williams, Martin Wash and Nathan Lynch all ruled out. Jonathan Cahill was on vacation so it was an achievement to field a team for this encounter. After 21 minutes the teams were level MacDonaghs (1-5) Silvermines (0-8).  Diarmuid Cahill had scored the goal from a penalty in the ninth minute after a foul on Louis Kennedy. Silvermines dominated the rest of the half and led by 1-10 to 1-5 at the break.

After 38 minutes Silvermines were six ahead. Bit by bit MacDonaghs clawed their way back into the contest and were just one behind with four minutes left. Despite their best efforts they couldn’t secure the elusive equaliser.

In the final group game we are at home to Kiladangan this weekend. Fixture details have yet to be finalised.

MacDonaghs qualified for the ‘A’ final with a hard-earned 1-11 to 0-11 victory over Newport in Puckane. It was a perfect evening for hurling with no breeze of any significance to affect the play.  The opening exchanges were very even and after ten minutes the teams were level on 0-2 each. Kilruane began to get a grip of the game and scored five points on the trot, a brace from Cillian Healy  and one each from Michael Cleary (65), Ray Quinlivan and Michael Hennelly. Newport rallied towards the end of the half and raised three white flags. Michael Cleary replied with a pointed free. Just before the break Michael was unlucky to see his shot whizz past the butt of the post with the Newport keeper beaten. MacDonaghs had a 0-8 to 0-5  interval lead which wasn’t a true reflection of their dominance in the opening half.

On the restart, Ray Quinlivan extended the advantage with a point from play. Newport converted a free to leave three between the teams again. In the 37th minute William Jones whipped the sliotar to the net after taking a pass from Michael Cleary. MacDonaghs now had a healthy six-point cushion and looked like they were going to drive on. However, the goal seemed to galvanise Newport. The hit the next five points and Kilruane went nineteen minutes without registering a score. While the forwards struggled in the second half the Magpies defence excelled. Shane Cleary and Paul Molloy were outstanding with all their colleagues in the backs rising to the occasion. With five minutes of normal time left our lead was down to the minimum and the momentum was with Newport. To the team’s credit they dug deep and chiselled out a victory. In the 56th minute Michael Cleary sent a magnificent long-range free sailing between the posts and two minutes later Cillian Healy extended the lead to three with his third point of the game. In closing minutes Newport attacked in search of the equaliser but our defence remained defiant.

In the final we will play the winners of Toomevara and Nenagh. 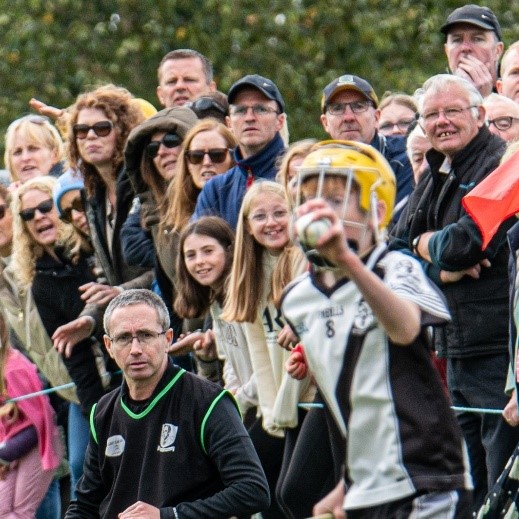 It was a very successful Saturday morning for both our sides in Páirc na nÓg, Thurles. Our second team recorded a nail-biting 1-6 to 2-2 victory over Cashel. Both teams agreed to play thirteen-a-side instead of the official nine-a-side. The sides were level on 0-2 each at halftime. A Cashel goal seven minutes into the second half put them into the driving seat. MacDonaghs were back on level terms with eight minutes left when Oisín Carroll found the net. Three points on the trot sent Kilruane into a three-point lead but a Cashel goal in the last minute of normal time tied up the game. Four minutes into added time Oisín Carroll bisected the posts to hit the winning point. We face St. Mary’s in the final.

Our first team booked a spot in the final with a 6-10 to 3-2 victory over Clonoulty Rossmore. MacDonaghs were always in control of this game and enjoyed an eleven-point lead at the interval.

St. Mary’s will provide the opposition in the final. 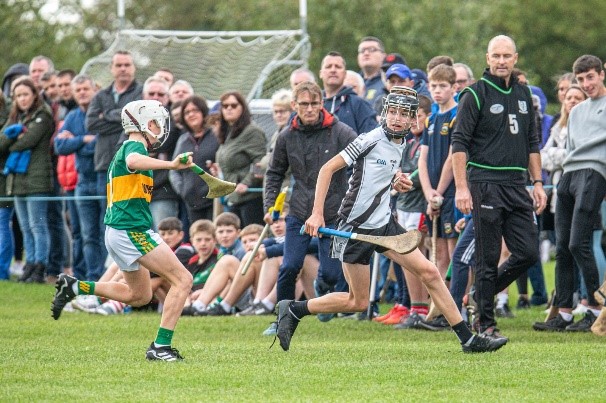 Congratulation to the U15 team and management on the County final victory over Moneygall. 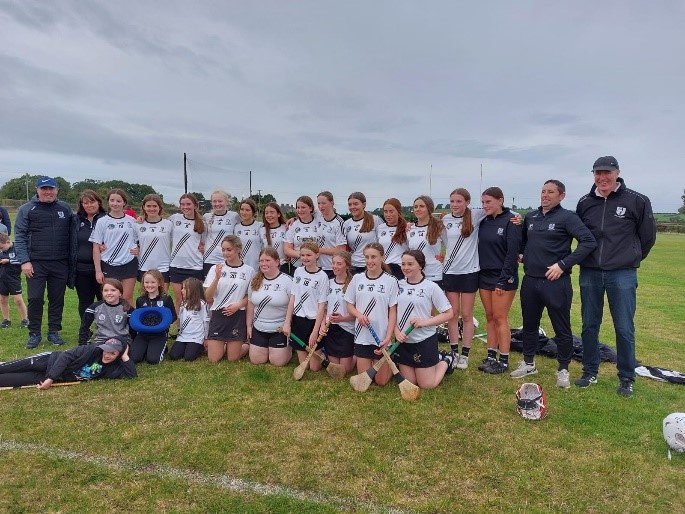 Congratulations to the Cloughjordan Community Games U11 Tag Rugby team, captained by Conn Foley, that claimed the All-Ireland title with a victory over Rathvilly, Carlow in UL. This team was backboned by Kilruane MacDonaghs hurlers and camogie players. 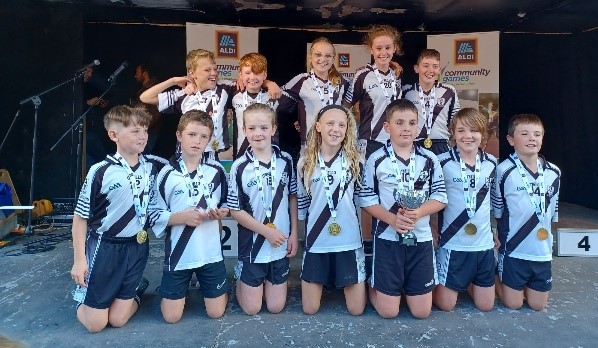 The Tipperary Draw commences on this Friday, 30th September. There is a €500,000 prize fund. This is a very important fundraiser for the club and we are confident that we will get the usual solid support from our members. You can still join by contacting Carmel 0872409854.

The Jackpot now stands at a very attractive €2,300. Tickets are available from the usual outlets or  you can join on Clubforce.com. Thanks for your continued  support.