In the County quarter-final we play Toomevara in Semple Stadium on this Saturday, 24th September at 5.45pm. Admission is by ticket only. Tap and go system will also operate.

In the second round we play Silvermines in MacDonagh Park on this Sunday, 25th September at 5.00pm.

Our first team qualified for the semi-final with a 3-13 to 1-13 victory over Roscrea in Moneygall. MacDonaghs opened brightly and fired over three points from play. Roscrea settled and had the better of the exchanges midway through the half. Kilruane finished the half strongly, scoring five of the last six points before the interval to leave them 1-8 to 0-6 ahead. Roscrea began the second half on the front foot and hit 1-4 without reply to edge into a two-point lead. A Ray Quinlivan goal steadied the ship and MacDonaghs kept their noses in front until the end. Ray Quinlivan got his second goal with the last puck of the game to leave a six-point gap at the final whistle. 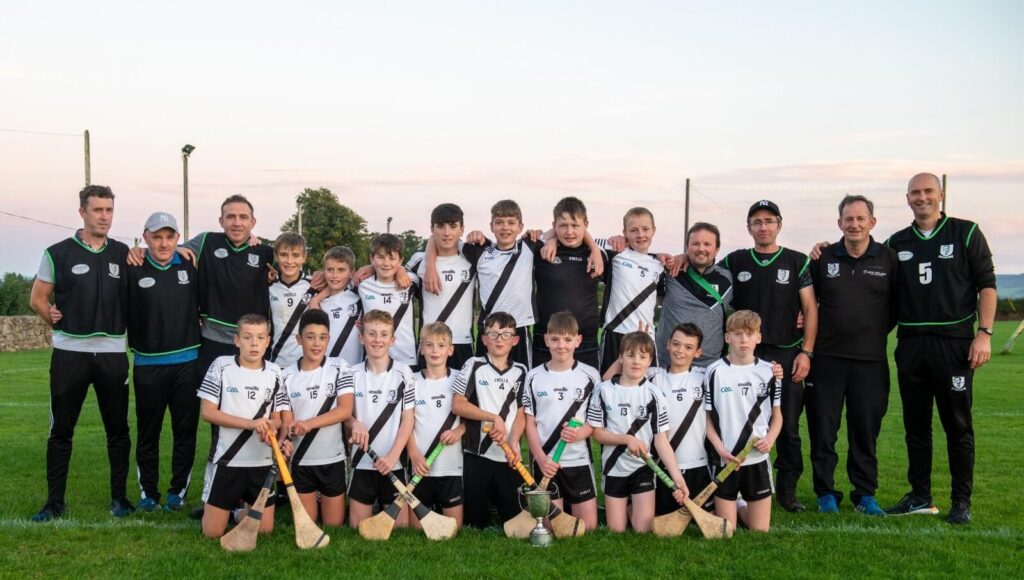 The Kilruane MacDonaghs club has long been renowned for its fighting spirit, a spirt that was very much in evidence last Wednesday evening in Kilcolman when our U13 ‘A’ team claimed the title with a 2-8 to 1-9 extra time victory over a quality Newport side. The U13 competition was inaugurated in 1963 and was replaced in 1972 by the U12 championship. MacDonaghs were champions in 1970 with a victory over Nenagh. The U13 competition was restored last year. In addition to our two U13 ‘A’ titles we also have five U12 ‘A’ titles – 1978, 1979, 2009, 2010 & 2014. Winning any ‘A’ hurling title in such a competitive North division, which has two large urban centres, is a notable achievement.

This year’s team showed great promise throughout the campaign, playing a lovely style of hurling. They had already beaten Newport twice, in the group stages and in the preliminary quarter-final. It was always going to be a huge task to repeat the feat against a Newport side that had a very obvious physical advantage. The opposition came with all guns blazing on this occasion and immediately went on the offensive. However, it was the Magpies who were first to score when goalie Dara Gaynor sent a long-range free sailing between the posts in the first minute. Newport began to pile on the pressure and in the fourth minute found the net after a series of rucks near the Kilruane goal. Two minutes later Gerard O’Looney bisected the posts with a free to leave the minimum between the sides. Newport hit back with two pointed frees to go four ahead.

There was a danger that they might get out of sight. However, MacDonaghs didn’t wilt and stayed in the game. The defence, which had a shaky start, began to get the measure of the Newport attack. The MacDonaghs supporters were in full voice in the 10th minute when the industrious Tom Campbell raised a green flag. Newport replied with two points before Gerard O’Looney found the net in the 19th minute. It was a superbly worked goal. Tom Campbell crossed the ball. In the one movement Gerard caught the sliotar, swivelled and fired a “rasper” to the corner of the net.  Both sides swopped a pair of points before the break. Hugo Healy and Tom Campbell raised the white flags for the Magpies. The teams were all square at the interval: MacDonaghs 2-4 Newport 1-7. 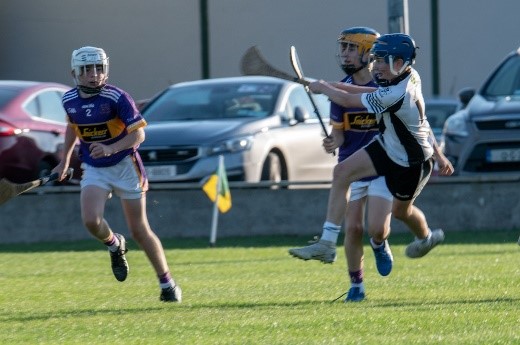 In the second half defences were on top. Every ball was fiercely contested. No soft frees were given. Just four points were scored in the half as the tension and excitement intensified by the minute. Hugo Healy put MacDonaghs ahead in the 28th minute and Gerard O’Looney was on target from a free in the 35th minute  to increase the lead. Two minutes later a Newport point from play cut the gap to the minimum. With ten minutes left (each half is 25 minutes) Newport levelled from a free. For the next ten minutes both sides gave it everything in search of the winning score. The MacDonaghs defence was heroic in this period. The midfield and forwards did everything in their power to engineer the winning score against a stubborn Newport defence.  When referee Pat Murray blew the final whistle the sides were level on a 2-6 to 1-9 scoreline. Extra time beckoned.

The MacDonaghs mentors accentuated the positive as the team readied themselves for battle once more. They had prevailed in extra time in the semi-final against Nenagh and believed they could do it again. Two periods of five minutes extra time were to be played. Every score was going to be crucial and any mistake could be disastrous. The defence which had excelled in normal time got even better. Keeper Dara Gaynor, who had been outstanding all through, was defiant in extra time, making some brilliant saves. Karl Ryan lofted a 65 just inside the right post in the third minute. The umpire signalled it wide but was overruled by the referee who ordered the white flag to be raised. This all added to the drama and tension. MacDonaghs were one point ahead at the end of the first period. Tom Campbell stretched the lead with a point from play in the second period. Two points was a dangerous lead. It was all hands on deck as Newport went in search of the goal. MacDonaghs refused to buckle and inspired by the brilliance of Dara Gaynor in the number one jersey they repelled every attack. The final whistle saw an eruption of unbridled joy from the Magpies players, management and supporters. The group stages of this championship tested the team’s skills. The semi-final and final were a test of character. The team had passed both tests with flying colours. The management team of Martin O’Looney, Mark O’Leary, Lenny  Gaynor, Aidan Ryan, Liam Grace, John O’Meara and Enda McLoughney had put in a huge amount of quality work with the players and it paid off. 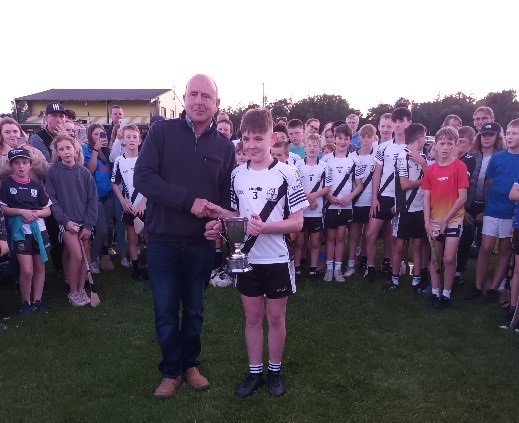 After the game Martin Carroll, Chairman North Tipperary Coiste na nÓg presented the Cup to captain James Gould. A cavalcade of cars then headed to Cloughjordan and were welcomed at MacDonagh Park by supporters including the senior panel. The customary tour of the village was then made. The car horns blared to let all and sundry know that Kilruane MacDonaghs were North Tipperary U13 ‘A’ hurling champions for 2022. 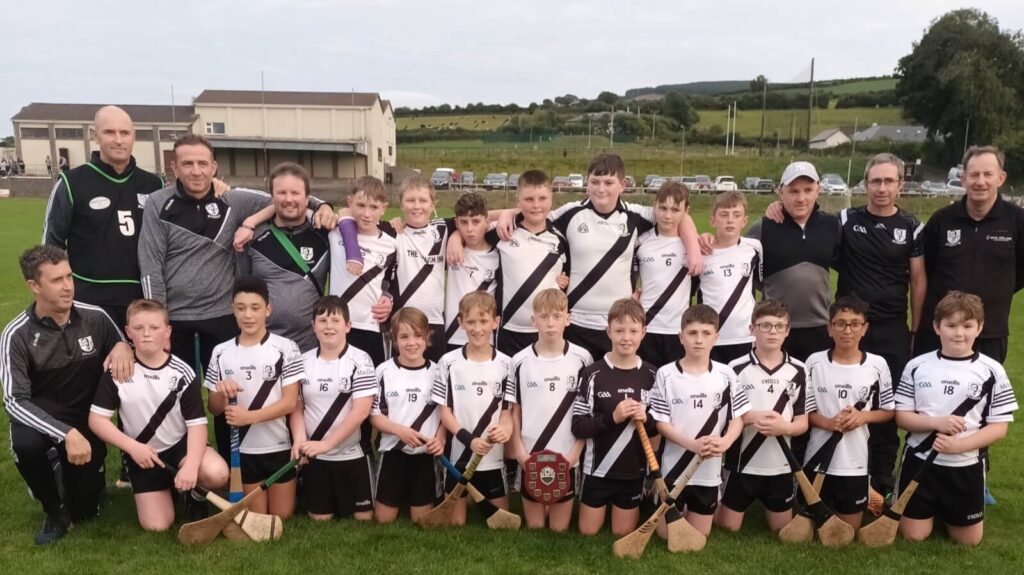 On Wednesday evening MacDonaghs took  on Roscrea in the ‘D’ final in Moneygall. In the group game Kilruane had pipped Roscrea. Martin O’Looney had more accurately described it as “robbed Roscrea. Intelligence reports indicated that Roscrea had performed impressively in the semi-final so all involved with our team knew that it would take a supreme effort to claim the title. This is a nine-a-side competition with each half lasting twenty minutes. To maximise participation all our group games and the semi-final were thirteen-a-side. However, on this occasion Roscrea were reluctant to play thirteen-a-side and only agreed to ten-a-side.

Ironically, the smaller number worked in our favour as we revelled  in the extra space and we triumphed on a 4-6 to 1-5 scoreline. This was a wonderful team effort with every player playing their part. Goalkeeper Colin Gaynor emulated his brother Dara’s performance in the ‘A’ final. On numerous occasions Colin advanced quickly off his line and whipped the sliotar to safety. At a crucial period in the second half he had the presence of mind to flick out the ball for a 65 as Roscrea searched for a second goal. On the inside backline Tadhg Teefey was outstanding and had a tremendous tussle with the formidable Roscrea full-forward. Ronan Hayes was soundness personified in the corner. Conor McGrath filled the centre-back slot and hoovered up an amount of ball throughout the game. Alongside him Sean Whelan was rock solid and gave little leeway to his opponent. 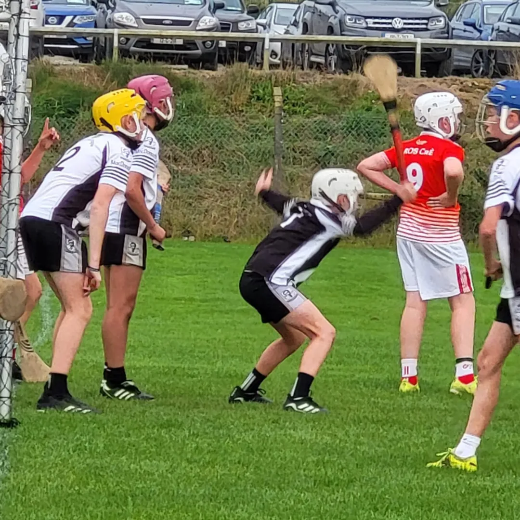 Captain Oisín Carroll had a capital game at midfield and relished the open spaces. In the half-forward line the pacy Arman Khan Wahid used his speed to great effect while Emmet Dwyer was a thorn in the Roscrea defence in both halves. On the inside line Shane O’Meara and Paul Foote linked up well together with Paul helping himself to 2-1. The subs all contributed to the victory. The athletic Dylan Sheahan got on a lot of ball. Shane Carroll was unlucky not to raise a green flag when the Roscrea keeper made a great save. James Last took his goal exceptionally well – palming the sliotar to the net before the Roscrea defence could react. James didn’t handpass the ball, therefore his goal was deemed legal by the referee. Liam Killackey and Odhran Goulding gave their best when called into action.

MacDonaghs went on the attack from the start and Oisín Carroll sent a free over the black spot in the first minute. This was cancelled out by a Roscrea effort from play in the third minute. The Magpies hit a purple patch and added 1-4 without reply with the goal coming from Ciaran Foote in the seventh minute. On the stroke of half-time Roscrea converted a 65 to leave the interval score 1-5 to 0-2 in favour of Kilruane.

On the resumption, Roscrea cut the deficit to five but Oisín Carroll restored the six-point advantage from a free. In the 26th minute Ciaran Foote put MacDonaghs in the driving seat when he got inside the defence and finished to the net with aplomb. Roscrea began to dominate possession and scored 1-2 to reduce the gap to four with three minutes of normal time left. Any hopes of a Roscrea recovery were dashed two minutes later when Oisín Carroll raised a green flag and James Last administered the coup de grace when he scored an opportunist goal deep into added time to leave MacDonaghs champions on a 4-6 to 1-5 scoreline.  A remarkable double had been achieved. Management had deployed their forces to maximum effect to land two titles.

After the game Martin Carroll, Chairman of North Tipperary Coiste na nÓg, presented the trophy to captain Oisín Carroll. As soon as the team crossed the Moneygall/Cloughjordan border at Stoneyacre the autumnal stillness was shattered for the second evening in a row as the noisy fleet of cars headed for the village. 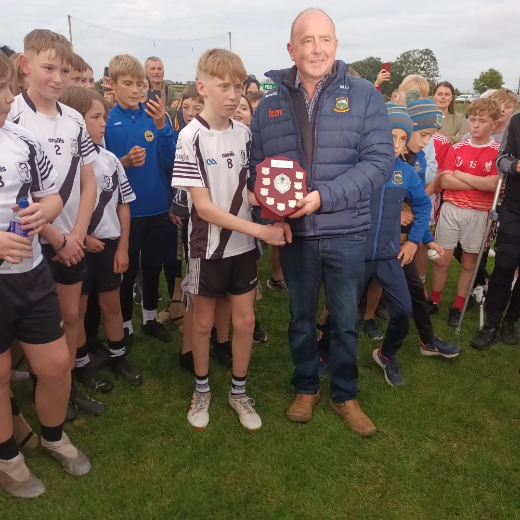 The celebrations have now been put on hold as both teams prepare for the semi-finals. The ‘A’ team will face Clonoulty Rossmore while the ‘D’ team  will take on Cashel.

On Saturday morning we had a very successful Blitz in MacDonagh Park. We fielded three teams, Cappawhite had two teams and Shannon Rovers also participated.

The Tipperary Draw has been deferred until  Friday, 30th September. There is a €500,000 prize fund. This is a very important fundraiser for the club and we are confident that we will get the usual solid support from our members. A total of €16,200 was won by our subscribers in the last Draw.

The Jackpot now stands at a very attractive €2,200. Tickets are available from the usual outlets or  you can join on Clubforce.com. Thanks for your continued support. 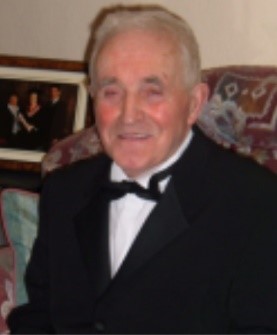 The club extends sympathy to the family of the late Dinny Heenan, Ringroe and to the family of the late Con Cleary, Mohernenagh, Ardcroney. Dinny Heenan played juvenile and minor hurling with Kilruane MacDonaghs. He was full-forward on the 1949 minor team that lost to a very strong St. Mary’s Nenagh side in the North final. Also on the team was his great friend Noel Mulcahy. Both Dinny and Noel were instrumental in establishing the Ardcroney Drama Group. Over the years Dinny built a reputation as a very fine actor with an amazing stage presence. In 1980 Dinny teamed up with  Noel Mulcahy, Anne Heffernan, Paddy Heffernan and Margaret O’Brien to win the Novelty Act competition in the North Scór final. Dinny had a great interest in greyhounds and was a familiar presence at the tracks around the country where he enjoyed some success. As a mark of respect the Tricolour in MacDonagh Park flew at half-mast. His coffin was draped in the club colours and both the Ardcroney Drama Group and Kilruane MacDonaghs members formed a Guard of Honour at his funeral. Ar dheis Dé go raibh a anam.