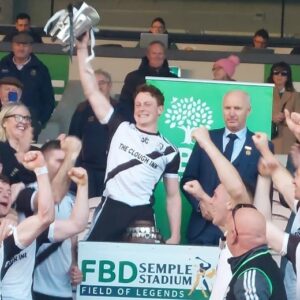 After the drawn game the mandatory post mortems were held in the local hostelries or where two or three gathered. Wise old heads nodded and whispered that “we had left it behind us.” However, they forgot to delve more deeply into our history to recall that the same sentiments were widely expressed after the drawn Munster club final against Blackrock in 1985 and we know who prevailed in that replay. Last Sunday in Semple Stadium the team of 2022 confounded the pundits as Kilruane MacDonaghs claimed the Dan Breen Cup for the first time since 1985 with a 2-20 to 1-16 victory over Kiladangan. This was the sixth time the County senior hurling title had come to the parish: 1902 De Wets 7-10 Carrick 1-2: 1977 MacDonaghs 1-5 Borris-Ileigh 0-5; 1978 MacDonaghs 2-14 Roscrea 2-13; 1979 MacDonaghs 2-18 Thurles 3-6; 1985 MacDonaghs 2-11 Roscrea 0-10  The omens didn’t look favourable at half time when Kilruane trailed by five points. The situation could have been worse only for Páidí Williams had made a terrific save from a Barry Hogan penalty in the seventh minute.

The second half will live long in the memory of MacDonaghs supporters as we outscored Kiladangan 2-13 to 0-7. A Cian Darcy goal in the 48th  minute had the Magpies supporters on their feet. Down the home straight MacDonaghs hurled like men possessed and when Cian Darcy rifled a daisy cutter to the net in the 62nd minute, after a pass from Willie Cleary, the foundations of the O Riain Stand shook  as Kilruane supporters gave vent to their feelings. It was fitting that Willie Cleary, who had scored the equaliser in the drawn game, lasered the sliotar over the bar from a free for the final score of the game. At the final whistle blew crowds surged on to the hallowed sod to hail the heroes, among them veterans of the seventies and eighties who were delighted to pass on the baton. To witness the sheer joy on the faces of Len Gaynor, Des Gaynor, Sean Melia, Johnny Keogh, Joe Gleeson, Connie Grace and a host of other diehard hard supporters was something to behold. No less thrilling was to see the exuberance of the young boys and girls who will be inspired to emulate the heroes of 2022.  Our parish exiles attended in droves confirming the old adage that the savage loves his native shore. It is our long-held belief that the Kilruane MacDonaghs Club is the heartbeat of the community so it was uplifting to see so many families who moved into the parish in recent years celebrate as if they were Magpies from the cradle. 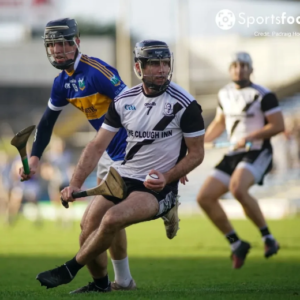 Congratulations to the players, manager Liam O’Kelly and his entire backroom team on claiming the Dan Breen Cup with a tremendous second half display against an excellent Kiladangan side. Thanks to all who have worked so diligently over so many years in the club to lay the foundation for this latest success. Thanks to our supporters for the explosion of black and white colours throughout the parish that helped create a fantastic atmosphere not witnessed since the All-Ireland Club final in 1986. The village was bursting at the seams on Sunday evening as the team was welcomed home. Thanks to all who helped organise the memorable homecoming at very short notice. A very special word of thanks to our main Sponsor Gary Kerley of the Clough Inn.

Commiserations to Kiladangan. We had to be at our very best in the second half to shade the issue. With such an array of talent at their disposable Kiladangan will be a very formidable force in Tipperary for many years to come.

The team has very little time to rest on their laurels as they face All-Ireland champions Ballygunner in Walsh Park on Sunday at 1.30pm. With so little recovery time it will be a major challenge. Hopefully, some of our injuries will have cleared up by then. Admission is by ticket only. The link to purchase will be circulated.  The game will be broadcast live on TG4.

The Jackpot now stands at a very attractive €2,800. Tickets are available from the usual outlets or  you can join on Clubforce.com. Thanks for your continued support. 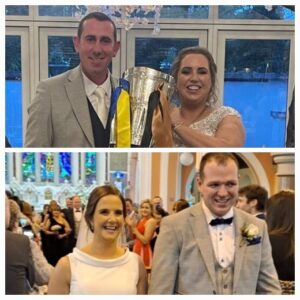