We qualified for the County final for the first time since 1986 with a merited 2-17 to 1-14 victory over Upperchurch Drombane in Semple Stadium. Heavy morning rain made conditions difficult for the players. MacDonaghs played into the Killinan End in the first half and dominated  the early exchanges. However, three wides in three minutes left us with zero on the scoreboard. In the 4th minute Willie Cleary opened our account with a point from a free.  After 11 minutes MacDonaghs edged into a two-point lead. A minute later Jerome Cahill scored an opportunist goal. Thomas Cleary had burst through the centre. His effort for goal was saved. Kian O’Kelly recycled the ball and as keeper Ciaran Shortt was attempting to clear Jerome Cahill blocked the sliotar into the net. Upperchurch replied with two points. Jack Peters limped off with a hamstring injury and Seamus Hennessy entered the fray on his 33rd birthday. With eighteen minutes gone Kilruane had a six-point cushion. Upperchurch built up a head of steam, hitting two points and adding a goal from Jack Butler in the 26th minute to reduce the deficit to the minimum. The Magpies responded to the challenge with points from Jerome Cahill and Willie Cleary. In the 31st minute Jerome Cahill scythed though the Upperchurch defence, offloaded to Cian Darcy who buried the sliotar in the top left hand corner of the net. Upperchurch  had the final point of the half from play to leave the interval score 2-9 to 1-7 in favour of MacDonaghs.

Kilruane started the second half impressively and stretched the lead to seven in the 35th minute. Upperchurch stayed in the game mainly through frees. Remarkably, we were awarded no free in the second half while I’m informed that Upperchurch got thirteen. We always looked likely winners but  couldn’t shake off the stubborn Mid outfit. With five minutes of normal time left we had a five-point cushion. Dean Carew looked to be in for a goal but Thomas Cleary effected a brilliant block to avert the danger. Sixty seconds later Thomas scored a terrific point under pressure and it looked like it was going to be MacDonaghs day. At the final whistle six points separated the sides and Kilruane were back in the County final. It had been the team’s best performance of the year. Credit to the management team for the team selection. They got the big calls right. Everybody is very aware of the very formidable challenge that lies ahead. Only two teams can win the Dan Breen in 2022 and Kilruane MacDonaghs are one of them.

As the team and management get their heads down to prepare for the final we are asking all householders to fly the colours. Let us create a special atmosphere like we did for the 2018 North final. On that occasion the team embraced the atmosphere and played out of their skins. Hopefully, the same will happen this time.

Our footballers play Mullinahone in the County ‘B’ quarter-final in Templetuohy on Saturday at 1.00pm.

No joy for our U15 ’A’  team, losing the North Final to Toomevara on a 1-13 to 1-10 scoreline in Templederry. Although they were only three points in it at the final whistle we can have no complaints as a six or seven-point margin would have been a fairer reflection of the play. Toomevara made the better start and led by 0-3 to 0-1 after thirteen minutes. We settled in the second quarter and the teams were tied on 0-4 each after eighteen minutes. Heading into added time we enjoyed a two-point lead but Toomevara struck the last two points of the half to tie the game on 0-7 each at the break. Our backs had coped well with the Toomevara attack with Shane Cleary outstanding in the number six jersey. However, with the exception of Michael Hennelly and Cillian Healy, we were making little headway in the attack. It was obvious that unless there was major improvement in this area in the second half the Cup would be heading to Toomevara.

With nine minutes gone in the second half we fell three points behind and the  game was going away from us. It took us thirteen minutes to register our first score of the half with two pointed frees from Michael Cleary keeping us in the hunt. Our defence was breached in the twenty-first minute when Toomevara got in for a goal. The Greyhounds added three points to open a seven-point gap. To MacDonaghs credit they kept plugging away. Shane Cleary, who had been pushed into the attack, reduced the deficit to six. In the 64th minute substitute Johnny Naughnane was hauled down and Ray Quinlivan converted the penalty. We had one last opportunity when a twenty-metre angled free from Ray Quinlivan was deflected out for a 65 which was well defended by Toomevara.

Disappointing that the team didn’t play to their potential. Hopefully, they will learn from this experience and realise that it takes a ferocious work rate from every player to win any final. Thanks to the management team of John Jones, Matt Cleary, Fergus England, Kieran Nevin and Niall O’Meara for their efforts during the year.

The Paddy Quinlan U11 Tournament was held in MacDonagh Park last Sunday morning with Moycarkey Borris, Murroe Boher, Burgess and Kilruane MacDonaghs participating. It was a very successful Tournament for the host club with victories over Burgess in the Cup (3-5 to 1-5) and Shield (3-4 to 2-2) Finals while we edged out Moycarkey in the Plate final. David Quinlan presented the trophies to our successful captains Ben Williams (Cup), Rian Harte (Shield) and Isaac Sheahan (Plate). Thanks to all the teams for serving up tremendous hurling in difficult conditions and to our mentors who have done terrific work with this group throughout the season. 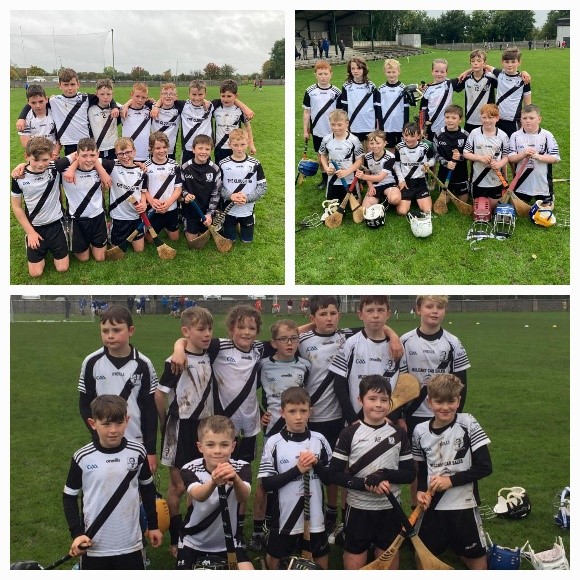 The U9s finished their outdoor season with a very successful in house blitz on Saturday morning. Craig Morgan and Jerome Cahill made the presentations with each player receiving a sliotar. Afterwards players and parents enjoyed some  refreshments. Thanks to all the coaches who have worked with this group throughout the year.

The U7s had their annual presentation night recently with Jake Morris on hand to do the honours.  The night concluded with refreshments for all present. Thanks to the mentors for their commitment during the year.

Congratulations to Ardcroney NS who won their North Football Final with a victory over Portroe in  Roscrea. Kilruane NS participated in a Blitz in Ballina along with Ballinahinch, Boher  and Lissenhall. Boher came out on top and progress to the final. Cloughjordan have qualified for the North final where they will play Boher NS while Cloughjordan girls have booked a place in the County semi-final against Mullinahone.

The October Draw will be held in the Clough Inn on this Friday, 14th October at 8.30pm. The Draw will be live on Tipp FM. Des Gaynor, who won €25,000 in the September Draw, will be presented with his prize. All are welcome to attend.

The Jackpot now stands at a very attractive €2,500. Tickets are available from the usual outlets or  you can join on Clubforce.com. Thanks for your continued support.

Best of luck to the Kilruane MacDonaghs intermediate camogie team who play Borris-Ileigh in the County semi-final in the Ragg camogie pitch on Saturday at 3.30pm.