We take on Upperchurch Drombane in the County semi-final in Semple Stadium on Sunday at 2.00pm.  Upperchurch are on the crest of a wave at the moment and will bring serious momentum into the game. However, if we can match their intensity we are in with a chance.  We ask our supporters to travel in huge numbers and get behind the team. Admission is by ticket only while a Tap & Go system will also operate.

Our first team play Toomevara in the ‘A’ final on Saturday in Templederry at 12.00. There will be very little between the teams and the side that wants it more will prevail. Hopefully, that side will be wearing black and white jerseys. Support will be crucial in this game so make your way to Templederry and help drive the boys over the line. Admission is €5. Pay at the gate.

Last Sunday in Clonoulty was a memorable day for the Kilruane MacDonaghs club when the U13s completed a historic ‘A’ and ‘D’ double with victories over St. Mary’s Clonmel. On a beautiful autumn day there was tremendous support for the Magpies to witness the 58th and 59th County titles come to the parish. Among the gathering was Kilruane MacDonaghs President Len Gaynor and diehard supporters Sean Melia and Johnny Keogh.

We have now won ‘A’ hurling titles at U12, U13, U14, U15, U16, U17, U18 and U21. Winning the U19 championship, which only commenced last year, would complete the jigsaw. This was our first underage  County ‘A’ title since the U12s won the championship in 2014 with a 2-8 to 2-4 victory over Knockavilla Kickhams in Templemore. Tadhg Teefey created his own piece of history last Sunday when he played in two County finals.  He was on the inside backline for the ‘D’ team and was introduced as a substitute in the ‘A’ final.

The Clonmel sides came to Clonoulty with exemplary credentials. Their ‘A’ team had toppled Durlas Óg in the semi-final and entered the game as firm favourites while reports indicated their ‘D’ team would be a difficult nut to crack.  With St. Marys selecting from a population of over 17,000 it was always going to take special performances from our teams to lay their hands on silverware. However, this year’s U13s teams play with the traditional MacDonaghs heart and determination.

Both teams followed the template that has brought success to MacDonaghs teams down the decades – thorough preparation, savage work rate and smart hurling. The template is no big secret and all our great victories have been based on these three pillars. The management team of Martin O’Looney, Mark O’Leary, Lenny Gaynor, Aidan Ryan, Liam Grace, Enda McLoughney and John O’Meara deserve tremendous credit for the quantity and quality work they have done with these teams. Between training and matches they have assembled on  115 occasions. 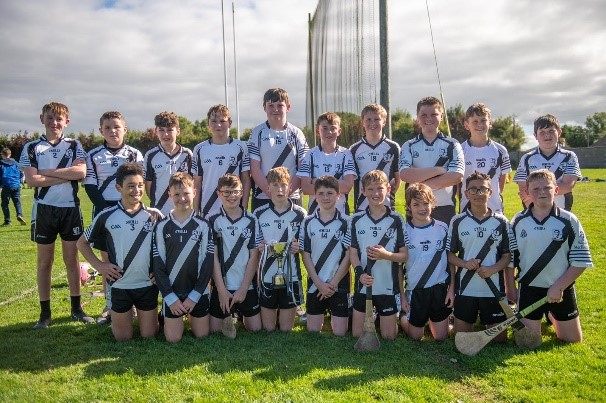 The day kicked off with the ‘D’ final on the second pitch. Both clubs agreed to play thirteen-a-side thereby maximising participation. Each half is twenty minutes. The full panels paraded behind the piper before the game, adding to the atmosphere. The minute’s silence in memory of Dillon Quirke was impeccably observed by players and spectators. The piper belted out the National Anthem and referee Donal Ryan threw in the sliotar.

MacDonaghs hit the ground running and Oisín Carroll was on target from a 65. Three minutes later the Magpies got a huge boost when an Oisín Carroll free deceived the St. Mary’s keeper and ended up in the net. The Clonmel side were enjoying plenty of possession but found the Kilruane defence in stubborn mood. Conor McGrath hoovered up an amount of ball at centre-back while on his flanks Sean Whelan and Shane Carroll let little through. Anything that did make it through was mopped up by the impressive duo of Odhran Goulding and Tadhg Teefey who gave great protection to the ever-dependable  Colin Gaynor between the sticks. 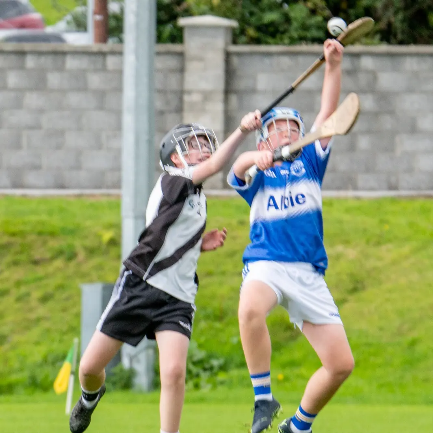 St. Mary’s made their territorial dominance pay when they got off the mark in the ninth minute with a point from play. MacDonaghs replied with a brace of white flags from Emmet Dwyer in the 13th and 15th minutes. St. Mary’s finished the  half the stronger with three points from a 65, from play and from a free to leave the interval score 1-3 to 0-4 in favour of the North champions.

The Magpies inside line of Ciaran Foote and Shane O’Meara had been starved of possession in the first half. It was obvious that this trend couldn’t continue in the second half so the management took remedial action. Cian O’Looney and Ronan Hayes were introduced and both helped beef up our half-forward line. Although St. Mary’s got the first point of the half there was now more purpose in Kilruane’s play. Ciaran Foote banged in a goal in the 24th minute and Shane O’Meara added a point.

This was cancelled out by a St. Mary’s effort from a free. There was now a more liberal supply of ball into our inside forwards and Dylan Sheahan raised a green flag in the 27th minute to open a seven-point gap. Kilruane were now in the ascendancy and the scores flowed freely. Shane O’Meara, who got better as the game wore on, tacked on three points, Dylan Sheahan chipped in with his second goal and points from Ciaran Foote and Oisín Carroll gave the Magpies a fifteen-point cushion with six minutes of normal time left. The management emptied the bench and Rory McLoughney, James Last and Daniel O’Brien were all called into action. St. Mary’s had the final score of the  game with a point from a free in the 40th minute to leave MacDonaghs champions on a 4-9 to 0-7 scoreline. This team went undefeated through the campaign, no mean achievement. 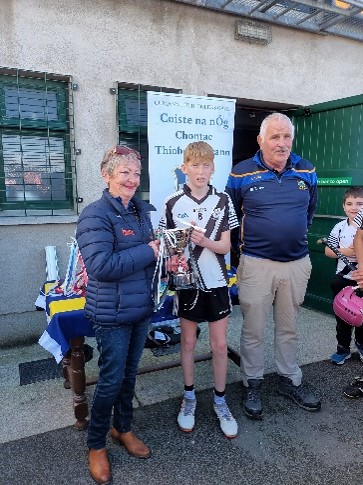 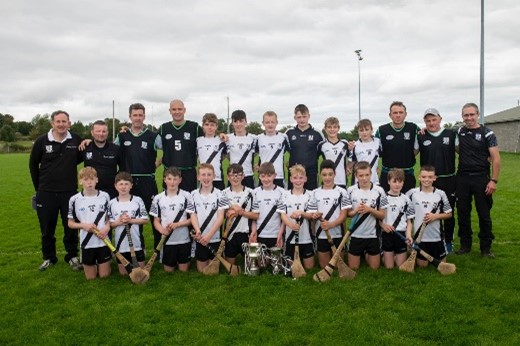 After the victory in the ‘D’ final the spirits were lifted as we faced the very formidable challenge of St. Mary’s in the ‘A’ decider on the main pitch. The teams paraded behind the piper, observed the minutes’s silence in honour of Dillon Quirke and stood to attention for the playing of Amhrán na bhFiann. Three-time All-Ireland referee Fergal Horgan was in charge of the whistle which was a clear signal that this was the Blue Riband final.

When the players lined out in their places the magnitude of the task facing the team was immediately apparent. Once again captain James Gould drew the short straw and he had the job of subduing St. Mary’s key man Billy Cooney, wearing the No 13 jersey. In the left wing-back position Mark Cleary was up against the imposing No 9 Rory Hennessy who would not have looked out of place on a minor team.

Both James and Mark were at a clear physical disadvantage  but the manner in which  they rose to the challenge exemplified the character of this team. And when Billy Cooney moved to the half-forward line just before the interval Lukah Williams did a magnificent job of policing him.

The final scoreline might suggest that this was a comfortable victory but the reality is that this game was in the balance right up to our second goal. There was huge commitment from both sides. The middle third was particularly congested and space was at a premium in this area. MacDonaghs work rate was superb throughout the field. The defence was rock solid, only conceding three points from play and limiting St. Mary’s to a point in the second half. 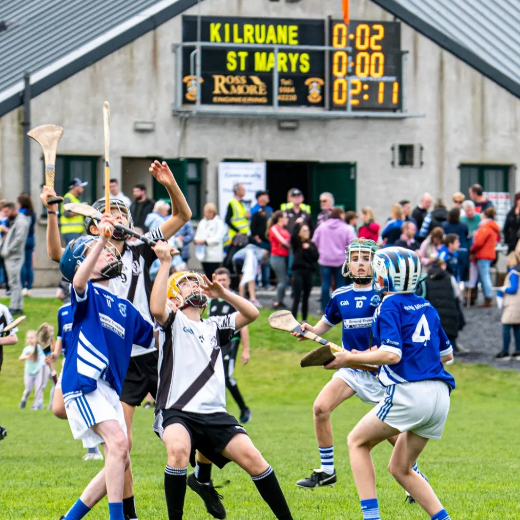 Dara Gaynor was outstanding in the number one jersey. James Gould and Kalen Grace replicated their North final performances. Tommy Gaynor has anchored the defence superbly throughout the season and once again he shored up the middle. On the wings Mark Cleary and Lukah Williams tackled tenaciously against bigger opponents. In the middle of the park Karl Ryan and Jack O’Meara had a great battle with the Clonmel pairing and more than held their own. Karl hit two magnificent line balls in the first half while Jack’s goal sealed the victory.

At centre-forward Hugo Healy was afforded little freedom but stuck to his task, scored a delightful point and won some  crucial frees. Senan O’Leary was always in the thick of the action and scored the goal that tilted the game in favour of MacDonaghs. On the other wing Tarla Doris was busy throughout the game and like the rest of his colleagues in the forwards didn’t allow the St. Mary’s  backs time and space to effect quality clearances. Tom Campbell, who starred in the North final, toiled gamely all through until he had  to retire injured late in the game. In the other corner Gerard O’Looney with his quick hands, head and feet was a constant threat.

MacDonaghs got off to a great start when Gerard O’Looney converted a free in the first minute which helped settle the team. In the second minute he passed a 45m free to the unmarked Tarla Doris and the umpire was reaching for the white flag. St. Mary’s got on the scoreboard in the 6th minute with a pointed free. A minute later Dara Gaynor made a terrific save to deny  St. Mary’s a goal. A green flag at this stage could have changed the whole complexion of the game. A Gerard O’Looney free in the 11th minute increased the Magpies lead and two minutes later Hugo Healy cut in from the right wing and sent the sliotar between the posts. St. Mary’s hit a purple patch and scored three points to leave the teams tied on 0-4 each after twenty-one minutes. Another free from Gerard O’Looney edged Kilruane ahead  in the 24th minute. Just on the stroke of half-time a St. Mary’s point from play left the teams deadlocked on 0-5 each at the interval. Each half is twenty-five minutes.

On the resumption Gerard O’Looney slipped his marker inside the first minute and struck a brilliant point. Eight scoreless minutes passed during which both teams went toe to toe in a battle for supremacy. The management switched Senan O’Leary to the inside line and Gerard O’Looney came out to the half line. This immediately paid dividends. Senan won a ruck in front of goal, used his feet to make the space and fired the sliotar to the net in the 35th  minute. This was the turning point of the game and although St. Mary’s replied with a pointed free two minutes later the momentum was with MacDonaghs. Gerard O Looney (41st minute) and Dara Gaynor (47th minute) were on target from frees to push Kilruane five ahead. St. Mary’s kept battling to reduce the deficit but the Magpies defence was heroic in the final minutes and when Jack O’Meara steered the sliotar to the net in the 51st minute the Cup was heading to Cloughjordan. Jubilation all round. The double had been completed. 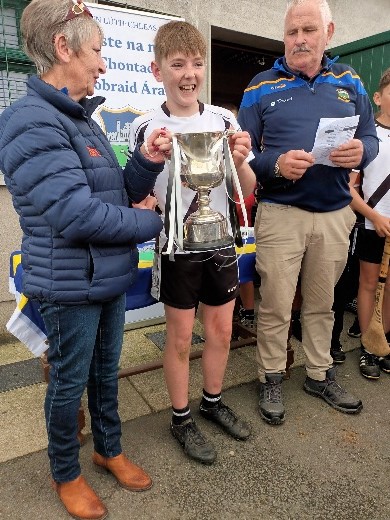 After a pit stop in Obamas on the way home the large cavalcade of  cars,  with  horns blowing and flags flying, toured the village as Kilruane MacDonaghs U13 A’ and ‘D’ teams, champions of Tipperary, were welcomed home.

Congratulations to Des Gaynor, Rapla who won the €25,000 first prize in the September Draw. In addition to the cash prize Des also won €1,000 in Prize Bonds while promoter Eileen Gaynor pocketed €500.  The next draw will be held in the Clough Inn on Friday, 1October.

The Jackpot now stands at a very attractive €2,400. Tickets are available from the usual outlets or  you can join on Clubforce.com. Thanks for your continued support.

Best wishes to Damian Lawlor with his new book “After The Storm: The GAA, Covid And The Power of The People“ which charts the story of how the GAA and its people managed to weather the Coronavirus Pandemic and re-emerge to fight another day.

Congratulations to Mikey Costello and Jenny Hogan who got married last week.

The club extends sympathy to: the Heenan family on the death of Barbara Heenan (née Flaherty), Garrancleary, Carney; Liam and Carmel Daly and Ann Lennon, Dublin on the death of their sister Joan Murphy, Reading, England; and Eilish O’Meara on the death of her husband Mark Wilkinson, Sydney.