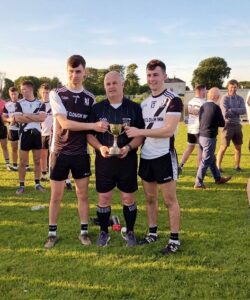 We won our first North title in this grade since 1975 with a 5-8 to 0-8 victory over Shannon Rovers in Borrisokane. On a perfect evening for football there was very little between the sides for most of the game and the scoreline is not an accurate relection of the play. In the first half Rovers had the better goal chances but it was MacDonaghs that took a 1-5 to 0-4 lead into the dressing room at the interval.  Eoin Hogan had scored the only goal of the half when he lashed the ball first time to the roof of the net in the 16th minute.

The game remain delicately balanced in the second half. In the 44th minute Cian Darcy found the net to open a six-point gap. Then came the turning point of the game. Rovers were awarded a penalty but Carl Williams denied George Hannigan with a great save.  MacDonaghs took full advantage of this reprieve and Craig Morgan scored the third goal for the Magpies in the 51st minute. The game was now over as a contest. Two goals in added time from Matthew Spain and Cian Darcy gave a rather flattering look to the scoreline. Well done to players and management on the victory. The County semi-final will take place in September. 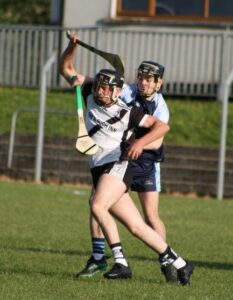 The Juniors began their campaign with a 1-16 to 1-15 victory over Nenagh Éire Óg in Toomevara. This was our first championship victory over our neighbours since 2015. Our last league victory over the town team in this  grade was in 2016. In the first half MacDonaghs played against the breeze, a breeze that very inconveniently died down in the second half. Nenagh were off the mark with a  point in the first minute and it seemed as if it was going to be business as usual. However, on this occasion MacDonaghs played with a steely determination and turned the game into a battle. With fifteen minutes gone the Magpies led by 0-6 to 0-5. Craig Hilmi found the net for Nenagh and it looked like they were getting into their stride. MacDonaghs responded immediately with a point from Matthew Moyles and a goal from Eoin Carroll in the 18th minute. At the interval  the scoreboard read 1-10 to 1-8 in favour of Kilruane.

In recent encounters the game was over at this stage but MacDonaghs were growing in confidence as the game progressed. Brian O’Meara was a handful at full-forward and Eanna Hogan at full-back and Tomás Hogan at number six marshalled a stuborn defence. Six minutes into the second half MacDonaghs suffered a blow when Brian O’Meara had to leave the field with a hamstring injury. Kevin Ryan who had successfully negotiated the bank holiday traffic from Dublin took his place. Scores were at a premium in the second half with both defences on top. As the game entered added time the sides were  level.  Rory Grace and Pat Conway fired over a point each. Nenagh cut the deficit to the minimum in the 64th minute but Kilruane held out to earn a valuable brace of points.

In the second round Toomevara will provide very stiff opposition in Nenagh on this Saturday at 7.30pm.

Well done to the Cloughjordan U13 camogie team that qualified for the County final in Semple Stadium with a hard-earned victory over Mullinahone NS.

The Jackpot now stands at a very attractive €4,300. Tickets are available from the usual outlets or  you can join on Clubforce.com. Thanks for your continued support.

Tickets for the Limited Draw go on sale this weekend. There is a Prize Fund of €17,000 with 17 prizes to be won. First prize is €10,000, 2nd €2,000, 3rd €1,000, 4x€500  prizes and 10x€200 prizes. The Draw takes place in the Clough Inn on Friday, 29th July. Tickets, costing €50,can be purchased from a vast network of sellers including committee members, players and parents. The money raised will be used to finance the development and maintenance of our facilities in MacDonagh Park to cater for all our hurling, camogie and football teams.

Congratulations to June Williams who won €500 and Deirdre McGrath who collected €200 in this month’s Draw.

Best of luck to all who are starting the Junior and Leaving Cert Examinations this week.

Len Gaynor was presented with the Tipperary Association Dublin Hall of Fame Award 2021 at a function in the Louis Fitzgerald Hotel, Naas Road last week. Len was joint winner with Peg Rossiter from Clonmel. Rachael Blackmore received the Tipperary Person of the Year 2021 at the same function. 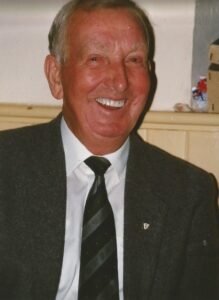 Martin O’Meara, Kyle passed to his eternal reward on 30th May. Martin was a staunch supporter of MacDonaghs and the personification of club loyalty. He was no fair weather follower. Martin was there to back the Magpies through thick and thin, in sunshine or in rain and in venues near and far. He was present on the glory days in Semple Stadium but he was also there in less glamorous venues the length and breadth of the county when MacDonaghs were in action. Martin’s allegiance was never in question. For him it was Kilruane MacDonaghs and Tipperary. Martin followed the fortunes and indeed the misfortunes of Kilruane MacDonaghs and Tipperary. He revelled in their success and took the disappointments to heart. In his early years Martin and his family travelled on bicycles to support the MacDonaghs. They also followed Tipperary at every opportunity.

The seventies and eighties were a golden period for Kilruane MacDonaghs. Martin would cycle in from Kyle to watch MacDonaghs training. It gave Martin great satisfaction that his nephew Johnny was on the successful three-in-a row team in the seventies and that his brother Billy was a selector with that side. Hip surgery prevented Martin from attending the All-Ireland Club Final in Croke Park in 1986 but wild horses wouldn’t stop him from attending the celebrations in Cloughjordan that night.

In 2005 Martin was elected Vice-President and held the position for eighteen successive years. In 2019 the Tipperary County Board  presented him with a Laochra Gael Award. Martin joined an elite group from the club who have been honoured with this accolade. As Martin’s mobility decreased in recent years he refused to let this handicap prevent him from attending club matches. Liam Haverty, his trusty chauffeur, brought him to the matches and managed to secure a good vantage point for viewing at most venues. Martin was present in MacDonagh Park, Nenagh in 2018 when he witnessed Kilruane MacDonaghs bridge a twenty-eight year gap to win the North senior championship.

When news of his death filtered through the Tricolour in MacDonagh Park was raised to half-mast as a mark of respect. It was a place where Martin spent many happy hours watching the matches and surveying the training. As Martin was carried to his place of rest his coffin was draped in the black and white colours and club members formed a Guard of Honour. Kilruane MacDonaghs extends sympathy to his sister Bridie, his relatives and friends. Ar dheis Dé go raibh a anam dilís.

The death of Paddy Kelly has taken place in Melbourne, Australia. The late Paddy was born in Rapla in 1947 and his family later moved to Southill. He attended Kilruane NS and then Nenagh Vocational School. In 1962 he played on the Kilruane MacDonaghs U15 team that won the North Rural title with a victory over Borris-Ileigh and ten days later he added another divisional medal when the Magpies overcame Nenagh in the Urban/Rural final. To complete a great year he collected a County Urban Rural medal when Kilruane got the better of Moyne Templetuohy in Nenagh. Paddy lined out at right wing-back in those victories. In the 1965 minor final he wore the number seven jersey as MacDonaghs relinquished their title to Roscrea. The match report gives him honourable mention.

In 1966 he took the boat to England and two years later he headed to Melbourne. In 1970 he joined the army and saw active service in Vietnam. Paddy was wounded by an exploding land mine, losing the sight of one eye. After months of rehabilitation Paddy continued to play hurling with the Sinn Féin club and football with St. Kevin’s. He refereed for many years in Melbourne and served on the Gaelic Park Committee. The Kilruane MacDonaghs club extends sympathy to his sister Mary Maher, Southill, his brother Bill, Nenagh and to Paddy’s family in Melbourne. Leaba I measc na naomh dó. 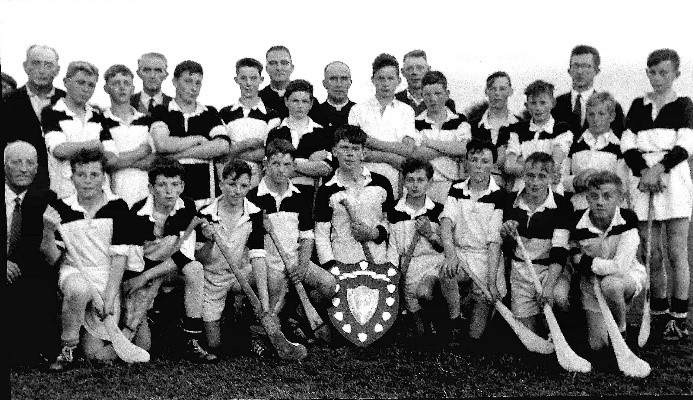 Photo 1962 Juvenile Team. Paddy Kelly First Player on the left in the back row.