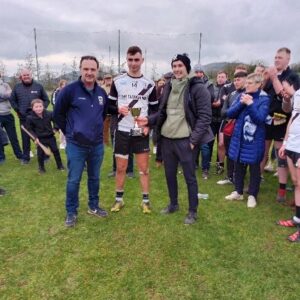 Congratulations to the Junior ‘B’ football team and management on their 1-11 to 0-10 victory over Boherlahan Dualla in the County final. This was the 61st County title to come to the parish, the 9th in football. Seamus Hennessy, who lined out at full-forward, won a County Junior ‘B’ hurling medal in 2004, thereby creating his own bit of club history last Saturday. This was the first adult County final football success since the seniors claimed the title in 1975.

On a dry chilly day the Templederry pitch was in good order for football. Cian Darcy opened the scoring in the first minute with a point from play. In the 6th minute Boherlahan levelled. Two minutes later the Mid men edged one clear. The game was swinging from end to end with both attacks looking dangerous. The impressive Cian Darcy had the sides all square after ten minutes. Four minutes later Carl Williams slotted over a placed ball to nose the Magpies one ahead. Boherlahan replied with an effort from play and the sides were tied on 0-3 each after fifteen minutes. A brace of white flags from Matthew Spain in the 20th and 21st minutes sent MacDonaghs two clear. Boherlahan cut the deficit to the minimum in the 26th minute. MacDonaghs finished the half strongly. Carl Williams scored the crucial goal in the 28th minute when instead of taking the ball in his hands he let fly first time and his daisy cutter beat the Boherlahan keeper. Cian Darcy tacked on a point in the 31st minute to leave the interval score 1-7 to 0-5 in favour of Kilruane.

For the second half the management decided to beef up matters and introduced Jerome Cahill, James Cleary and Conor Austin. However, it was Boherlahan who were the dominant team in the third quarter and after 44 mins had cut the gap to two. Points from Cian Darcy (45th minute) and Seamus Hennessy  (47th minute) helped steady the ship. Boherlahan kept plugging away but could get no nearer than three points. At the end of a high-quality game MacDonaghs were crowned champions and completed the senior hurling and junior football double.

Kilruane MacDonaghs now go on to represent Tipperary in the Munster club championship. This competition, which is organised by the Knockaderry club in Limerick, takes place in January. Cooraclare (Clare), Kilgarvan (Kerry), Diarmuid O Mathunas (Cork), Stradbally (Waterford) and Castletown Ballyagran (Limerick) will also be participating.

In the second round of the hurling championship we drew with Silvermines in MacDonagh Park and booked a place in the quarter-final. We scored 0-15 in reply to 2-9 from the visitors. With the breeze in our favour we led 0-10 to 0-4 at the break. However, we lost Kian O’Kelly through injury in the opening half though he did return to action towards the end of the game. Despite going a man down in the second half, we fully deserved to take a point with Silvermines equalising from a penalty with the last puck of the game deep into a generous amount of injury time.

In the quarter-final we have a home tie against Newport on this Sunday, 11th December. Time to be confirmed.

In the County football quarter-final we lost 2-6 to 1-8 against Sean Treacys/Annacarty in Castleiney. An early goal for the combination put us on the back foot but we came into the game as the half wore on and trailed 2-2 to 1-3 at the interval with Tom Austin scoring the goal. Despite a battling second half performance by MacDonaghs, the West combination held out for victory. There was very little between the teams and on the balance of play we deserved a draw.  Andrew Hayes had a great effort saved in the first half and cannoned one off the upright in the second half.

The rescheduled Annual General Meeting will be held in the Clubroom on this Friday, 9th December at  8.30pm. All are welcome to attend.

The Annual General Meeting of the Juvenile Club will be held in the Clubroom on Monday, 12th December at 8.00pm. All who are interested in the promotion of Juvenile Games in the parish are asked to attend.

Congratulations to Darragh Peters who was named Tipperary New York Hurling Club Player of the Year. Darragh was presented with his award at the club’s annual Dinner Dance on last Saturday night. 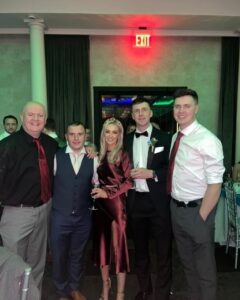 The Jackpot now stands at a very attractive €3,300. Tickets are available from the usual outlets or  you can join on Clubforce.com. Thanks for your continued support.

Congratulations to Simon Ryan, Beechwood who won €500 in the December Draw.

The club extends sympathy to: the family of the late Josie Whelan, Nenagh Road, Cloughjordan; Terry Brophy, Townfields on the death of her sister Eileen Brophy, Kilmore, Clare; and the Murphy family Lahorna, Ardcroney, on the death of Kathleen Murphy (née Heffernan).