A 2-16 to 1-9 home victory over Newport secured a place in the semi-final. A brace of goals from Kian O’Kelly inside the first ten minutes helped lay the foundation for victory. We led by 2-10 to 0-4 at the interval. Newport shaded the second half but MacDonaghs always kept sufficient daylight between the sides.

In the semi-final we are away to Burgess on Sunday at 1.30pm. 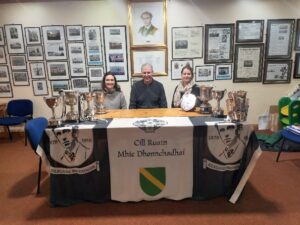 Tributes were paid to Joe Whelan who stepped down after five years in the chair and to John Mulcahy who vacated the role of treasurer after seven years in charge of the finances. Best wishes to our  incoming chairman Dave Carroll and our new treasurer Sinéad Gaynor as they assume leadership roles in the club. The following motion was passed unanimously: “The Kilruane MacDonaghs GAA Club amalgamate with the Kilruane MacDonaghs Camogie Club in line with the GAA One Club Guidelines, 2017 and that an Amalgamation Committee consisting of three members of the executive committee from each club be established to manage the amalgamation process.”  The same motion had been passed unanimously at the recent AGM of the Camogie Club.

The Jackpot now stands at a very attractive €3,400. Tickets are available from the usual outlets or  you can join on Clubforce.com. Thanks for your continued support.

The club extends sympathy to the Gillespie family on the death of Ruth Gillespie, Blackpool, Cork and formerly Glenard, Cloughjordan.