Our second team gave a very good account of themselves before losing out to Annacarty by  4-14 to 4-5 in the ‘D’ football championship in Borrisoleigh.

The Nursery Programme for boys and girls started in glorious sunshine on the Astro Turf last Saturday with a tremendous turnout. It continues on this Saturday at 10.00am. All four, five & six-year-old boys and girls are welcome to attend. Contact Brian Gaynor 0872535695 for further information. 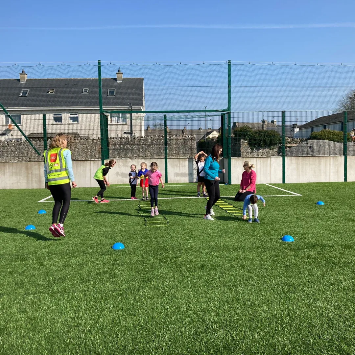 Membership subscriptions are now due. Fees for 2022: Adult Players €100; Players U17 €60; and non-playing adults €60. Membership can be paid by logging on to www.Foireann.ie and selecting Membership Options. If you haven’t a Foireann Account click on New User and Register.

Once again a very attractive Club Package is being offered to members. For just €200 you will have a full year’s Lotto subscription, entry to the Tipperary Draw as well as your membership. In effect, supporters who subscribe to this Package will have free membership — a saving of €60.

We are currently developing a Club Plan. The Steering Committee, under the chairmanship of Dave Carroll, has already developed a template that includes dates for specific actions to be completed. As part of the process players, supporters and members of the community are being invited to complete an online Questionnaire. The link has been widely circulated through various WhatsApp groups in the club and is available from Dave Carroll 0872332267, any club official or committee member.

The Ardcroney Community Field is organising a Calves for Cash Fundraiser. The committee is looking for calves, people to rear the calves and donations towards rearing the calves. All proceeds will go towards Phase 1 Development which includes a new car park facility and improvement of entrance. Our second field, which is in constant use, is located in Ardcroney so all members are asked to support this fundraiser. Contact Matt Cleary 0874171382 for further information.

The Jackpot now stands at a very attractive €3,300. Tickets are available from the usual outlets or  you can join on Clubforce.com. Thanks for your continued support.

The death of Jim Reddan severs yet another link  with the Kilruane MacDonaghs senior team that won three-in-a-row North and County titles 1977-1979. Hurling was in Jim’s blood. His father Jack won North senior medals with MacDonaghs in 1940 and 1944 so it was no surprise that Jim would follow in his footsteps. In 1960 Jim was part of the juvenile squad that overcame Moneygall in the North final and the following year he lined out at corner-back in another victory over our neighbours. 1962 was a vintage year for the juvenile team. Jim was now marshaling the defence at number six. Victories over Borris-Ileigh in the Rural final and Nenagh in the Urban Rural final saw Jim add to his collection of North medals That team went on to claim the County Urban Rural title with a victory over Moyne.

Jim progressed on to the minor team and was wing-back on the side that overcame Newport in the 1964 North Final. Jim made his senior debut in 1969. He moved to Carrigatoher in 1972 and threw his lot in with Burgess for three years. In 1975 Jim set anchor in his native parish once more and resumed his career in the black and white jersey. That year he was part of the senior football panel that captured the County title at the expense of Loughmore. In 1977 he was to play a crucial role as the Frank McGrath and Dan Breen Cups were captured. His three goals in the victory over reigning champions Moneygall helped ignite the season. Jim collected two more North and County medals in 1978 and 1979. He retired at the end of the 1979 season. In 1994 he was a selector on the U14 ‘B’ football team that won the North final.

Jim was the quintessential team player. He played where he was asked. What you saw was what you got with Jim. There was no pretence. Jim used his power and strength to great effect. He was humble and modest. Jim recognised his strengths and was very much aware of his limitations as a player. He gave his best in the black and white jersey, enjoyed his hurling but it wasn’t life or death for him.

As a mark of respect the Tricolour flew at half-mast in MacDonagh Park. His coffin was draped in the MacDonaghs colours and club members formed a Guard of Honour as his funeral arrived in Ardcroney. Sympathy to his sons Jim, Robert, Declan, Michael, John, Dan and Nigel, his daughters Caroline and Majella, his brothers John, Michael, Denis and Phil, his sister Margaret and extended family. Ar dheis Dé go raibh a anam.