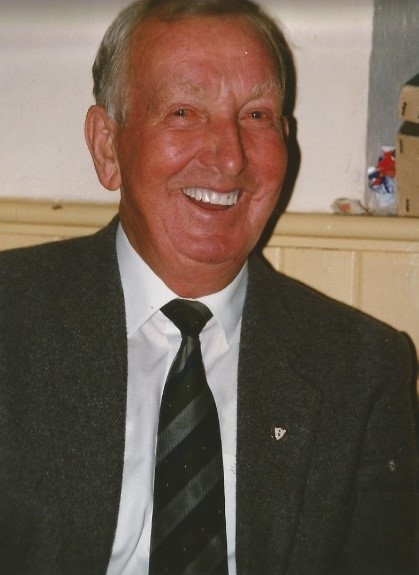 On behalf of the Kilruane MacDonaghs Club I would like to pay this tribute to Martin, one of our vice-presidents and one of our greatest supporters. Martin was a staunch supporter of the club, a steadfast supporter of the club but most importantly of all a loyal supporter. The Roman orator Cicero said that “Nothing is more noble, nothing more venerable than loyalty.” Martin was the personification of club loyalty. He was no fair weather follower. Martin was there to back the Magpies through thick and thin, in sunshine or in rain and in venues near and far. He was present on the glory days in Semple Stadium but he was also there in less glamorous venues the length and breadth of the county when MacDonaghs were in action.

Martin’s allegiance was never in question. For him it was Kilruane MacDonaghs and Tipperary. The black and white and the blue and gold. No other colours mattered. Martin followed the fortunes and indeed the misfortunes of Kilruane MacDonaghs and Tipperary. He revelled in their success and took the disappointments to heart. Martin was less than pleased to see all the counties in Munster beat Tipperary this year. A Limerick nurse in the home was suggesting that Martin should shout for Limerick in the Munster Final. I think she was on a loser there. Sadly, Martin will not be with us to see the final next Sunday

Hurling was a huge part of Martin’s life. He was affectionately known as Killeen and this nickname  has its roots in hurling. Kilruane MacDonaghs and Kiladangan were great rivals in the 1940s – not much has changed in the intervening decades. One of their best players was Jim Killeen. Jim was a lefthanded hurler or as we called it a ciotóg. Martin was also a ciotóg and when he was hurling with the lads in McCormack’s field they used to say he was a  real Jim Killeen and the nickname stuck to him. Most of my generation never called him anything other than Killeen.

Martin’s love of hurling was nurtured in the O’Meara household in the townland of Kyle. His mother Lizzie  was present in Thurles in December 1903 when the De Wets defeated Carrick-on-Suir in the delayed 1902 County final. Remarkably, 74 years later she was present in Semple Stadium to see her grandson Sean, or big Johnny as we called him, win his first County Final when Kilruane MacDonaghs overcame Borris-Ileigh on a day when rain of biblical proportions saturated players and spectators alike. Martin’s brothers  Billy and Ton hurled with Kilruane MacDonaghs and also served time as selectors. Passion for hurling was like Covid in the O’Meara household. It was contagious. If you weren’t interested in hurling you were in trouble as conversations before during and after meals were dominated by one topic. Discussion on hurling also permeated the work in the bog. The cutting, turning, footing, heaping, drawing out and drawing home the turf seemed less arduous and time flew by as teams  were picked, selectors criticised, referees castigated without ever impeding progress in the bog. On Sunday evenings Martin and the locals would congregate at Haverty’s cross. Again games were parsed and analysed and it was the venue where post mortems were held – post mortems after defeats could be very sombre affairs. Haverty’s Cross or Kyle Cross  was like an educational institution. You always learned something there when the locals gathered.

Martin and his family travelled on bicycles to support the MacDonaghs. They followed Tipperary at every opportunity. Whenever travel to an intercounty game wasn’t possible the O’Meara clan and their neighbours gathered around the wireless to hear the legendary commentator Micheal Ó hEithir bring the thrills and spills of the game into the kitchen. Martin saw the ferocious clashes between Tipperary and Cork in Limerick and Thurles when giants of the game such as John Doyle and Christy Ring were locked in combat like the gladiators in the Colosseum. He had a particular affection for the great Tipperary three-in-a row team of the 1949, 50 and 51 – a side that was powered by the Kennys of Borris-Ileigh, Pat Stakelum of Holycross and Tony Reddin of Lorrha. One of his favourite players was Jimmy Doyle of Thurles Sarsfields  an artist  supreme on the hurling field and a member of the terrific Tipperary team of the sixties. Of course Martin was delighted that our own Tom McLoughney and Len Gaynor played vital roles in those All-Ireland victories and he was proud when Mark O’Leary and others followed in their footsteps by winning All-Ireland medals. Martin was a big fan of Francis Loughnane of Roscrea, one of the best ever forwards to wear the blue & gold.

For a period Kyle was a bit of independent republic and fielded its own Junior hurling team. Not many people might be aware that they also fielded Junior and minor football teams. Kyle was renowned for its stone black turf and the hurlers of Kyle mirrored the quality of the turf.  They were hardy boys who gave little quarter on the field of play and asked for less. Martin would have attended every game to see his brothers, friends and neighbours uphold the honour of the Kyle. Most of these encounters were not for the squeamish and Martin took great delight in recalling some notorious incidents. I am very much aware that you cannot libel the dead but to be on the safe side I am going avoid mentioning names. On one occasion a Kyle player, we will call him Pat, pulled a stroke that in the present day climate would not only merit a red card but would probably result in a court appearance.  “ That’s a very mean blow” complained a member of the opposition. “T’is begor” answered Pat “ and here’s another mean one” and without blinking an eye he promptly flattened the player who was complaining. Martin would laugh heartily, clap the hands and the tears rolled down his face as he vividly recalled the scene as if it was only yesterday.

The Kyle boys were no mugs and if things weren’t going well they could always fall back on Plan B. Martin remembered this particular match in which Kyle were struggling and were actually being bullied  – something which very rarely happened. One of the Kyle players was fed up and called out to his colleagues. “Lads, we’ll have to start thinning them out.” There was no need to repeat the order and there was skin and hair flying for the rest of the game. Kyle played the game hard but when the final whistle blew what happened on the field was left on the field. That was the nature of the game then. Nobody would be whingeing or whining on Twitter, Instagram of Facebook when the game was over. This is best illustrated by the 1949 final of the Lord Abbot Cup between Knockshe and Kyle in Ballyskenagh. Seven players got their marching orders and when the victorious Knockshe captain the “Twin Heenan” was accepting the Cup he thanked the Kyle team and mentors for a clean and sporting game to thunderous cheers from both the  Kyle and Knockshe  supporters. Martin loved recalling that particular match.

The seventies and eighties were a golden period for Kilruane MacDonaghs. Martin would cycle in from Kyle to watch us training. He would always be optimistic and no matter how bad things were going he would say ”If the boys strike form they could do it on Sunday.” It gave Martin great satisfaction that his nephew Johnny was on the three-in-a row side in the seventies and that his brother Billy was a selector on that side. Hip surgery prevented Martin from attending the All-Ireland Club Final in Croke Park in 1986 but wild horses wouldn’t stop him from attending the celebrations in Cloughjordan that night.

In 1993 John Lawlor  became club secretary and he used to bring Martin down to training in MacDonagh Park. Then Martin started to attend the club meetings in Cloughjordan with John. The monthly meeting was a great social outlet for him and a chance to hear his favourite subject being discussed. In 2005 Martin was elected Vice-President and has held the position for eighteen successive years. In 2019 the Tipperary County Board  presented him with a Laochra Gael Award. Martin joined an elite group from the club who have been honoured with this accolade. It is given to individuals who have given distinguished service as a player, administrator, club member or supporter. Martin was a very popular recipient and there was universal agreement that he exemplified and typified the loyal and faithful supporter.  For those of us who were privileged to have enjoyed some success in the black & white jersey the joy that the success brought to supporters like Martin meant more to us than all the medals we won.

As Martin’s mobility decreased in recent years he refused to let this handicap prevent him from attending club matches. Liam Haverty his trusty chauffeur brought him to the matches and managed to secure a good vantage point for viewing at most venues. Martin was present in MacDonagh Park, Nenagh in 2018 when he witnessed Kilruane MacDonaghs bridge a twenty-eight year gap to win the North senior championship. There is  a great photo of Martin, Billy & Eamon O’Shea with the Frank McGrath Cup after that match. A picture paints a thousand words and a beaming Martin showed how much that victory meant to him.

For the last few days the Tricolour in MacDonagh Park has been flying at half-mast as a mark of respect. It was a place where Martin spent many happy hours watching the matches and surveying the training. As Martin is carried to his place of rest his coffin will be draped in the Kilruane MacDonaghs colours – colours that meant so much to Martin. Players and club officials of different generations will form a Guard of Honour  – one final tribute from the Club, Martin’s Club.

On behalf of Kilruane MacDonaghs I would like to extend sympathy to Bridie, all his relatives and friends.