Mighty Macs
Well done to all involved in the three week series of ‘Mighty Macs’ on Saturday mornings. The program was tailored for the younger generation of hurlers and we look forward to seeing the same faces as u6 training commences shortly. Thank you to the coaches who helped out.

U10
Our U10s traveled to Borrisoleigh for a Blitz last Wednesday evening and we will welcome Nenagh to Ardcroney this Wednesday for a blitz at 7pm. Our first County Blitz of the season will take place Sat 27th.
Photo: u10s at Blitz in Borrisoleigh on Wednesday 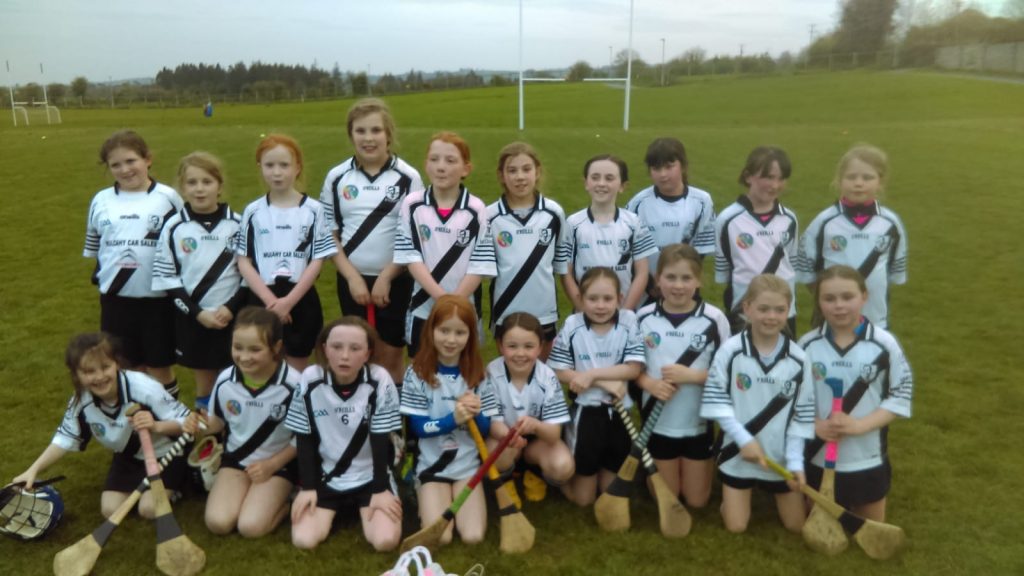 U14
Well done to our superb u14 team who represented the club so well in the Féile Semi Final in Boherlahan last Monday evening. With a strong wind, the girls fell short to a stronger Cashel side on the night.

U16
Well done to our u16 girls on earning their spot in the county semi final this Tuesday at 6.45 against Boherlahan in the Ragg. The girls have had a great campaign of late and reports of our most recent matches can be read below.

Last Thursday the girls played Kiladangan in what turned out to be a cracking game. Kilruane were first to register a score while Kildangan hit a purple patch and went ahead with a number of goals. Kilruane rallied back to lead by two points at the half time whistle.  Kiladangan regrouped and pulled away to a 5 point lead mid way through the second half. It seemed they would see it out but composed as ever our girls responded with great resilience. Before the final whistle Kilruane managed to scrape themselves a two point victory. Final score 3-9 to 3-7. The determination showed by each individual contributed to the team effort that secured the win. We now await results from remaining matches which will determine our progression.

U16 V Nenagh
On a damp Tuesday evening the u16s faced a physically strong Nenagh side in poor conditions. Our girls got off to a slow start against a strong breeze and found themselves down by two goals after 10 minutes. True to their spirit the girls rallied back to a half time score of 1–2 to 2 goals. With the wind on our backs we pushed on to outscore Nenagh 2–1 in the second half. Despite losing Kaci Sullivan and Grainne O’Meara to injuries, our subs and players dug deep to secure a victory.  From our goal keeper Emma Williams throughout the field, our 14 players gave their all, especially Aishling Nevin and Leanne Gould who were performed outstandingly.  Our thanks to Nenagh for an exciting match that finished Kilruane 3–3, Nenagh 3-0.

U16 V Moneygall
Our U16 girls came up just short to a skilful Moneygall side in their fourth match of the season at St Flannan’s Park on Saturday. Moneygall got off to a great start with a few scores leaving Kilruane on the back foot of what would prove a high scoring game. As usual the girls battled on and Leah Sullivan struck with a goal near the end of the first half. After a half time turnaround we began to apply pressure with the inside forward line contesting strongly. Kate Ryan had two 21 yard frees blocked over the bar before another found the back of the net.  The girls managed to peel back to a gap of just 2 points but a shortage in numbers saw us run out of steam. Moneygall added another goal, securing the win on a score line of 6–3 to 4–5. Our first loss will not quench the determination of this driven group of girls facing into their final few matches. Our thanks to Moneygall for a good sporting game and their excellent pitch and facilities.

Intermediate
Despite miserable conditions, our intermediates secured their third win out of three league matches when they defeated Borrisoleigh Sunday last. This week’s walk over from Thurles secures us a league semi final spot, details of which will be decided on at a later date.
(Photo: Captain Claire Kennedy is presented with skort and socks kindly sponsored by Donald Austin, Centra Cloughjordan)


Schools
Congrats to Ardcroney NS U11 Camogie team who have earned their place in the County Finals in Semple Stadium.

Well done to  Cloughjordan NS U13 and U11 Camogie teams who participated in their first ever Cumann na mBunscoil competitions over the past few weeks.

Commiserations to the Borrisokane CC Camogie team who came up just short to Coachford, Cork after extra time in the senior Munster Final last week. Final score 1-16 to 2-9.


Handball
The annual girls Interprovincial Team of Ten was played the week before last in Kingscourt, Co. Cavan. Each provincial team is made up of girls from U13 to U17. With the competition played in a round robin format, the winner is decided on aggregate scores. This year, Tipperary reps on the Munster team were Christine Percy and Hannah Grace. A very competitive days play ensued with the result in doubt right up to the very last game, leaving Munster victorious by a mere 8 aces and winning back the title from Leinster. Final score Munster 158 points, Leinster 150 and Connacht 13. Well done girls!


County Camogie
Commiserations to Laura Shinners and the Tipperary Minor Camogie team who came up just one point short of Clare in the All Ireland Semi-Final on Saturday. Final score Clare 0-12 Tipp 1-8.